Roughing It in the Bush With Gassendi

Posted on November 10, 2019 by Administrator

This week’s transit of Mercury takes me back to May 9, 2016, my first time seeing the event. 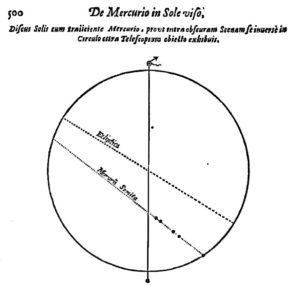 Gassendi’s record of the 1631 transit of Mercury. Pierre Gassendi from scientus.org

That Monday morning, I was camped in my station wagon at the dedicated dark-sky site near Kaladar, Ontario. Not at the actual platform, but on a hidden remnant of old Highway 41, well back in the woods at the end of a rocky dirt track leading from the parking area. I’d spent Saturday afternoon bombing around the backroads from Napanee to Beaver Lake, then headed to the North Frontenac Dark Sky Preserve for some evening astronomy.

Unfortunately, with that night came a downpour in the blackest dark I’d ever seen. It was a wild ride back to Kaladar, the Ford’s headlights catching three soaked deer bounding into the darkness from the highway. Rain drummed on the roof as I lay in my sleeping bag. Would the sky be cloudy for Monday morning?  Would I be able to duplicate Pierre Gassendi’s historic first observation of a transit of Mercury?

Sunday turned out clear and sunny, if chilly for May. By sunset I had my scope set up on a mossy granite knoll by a quiet little lake. I planned to pass the night looking at galaxies in Ursa Major, then watching Jupiter, and then Mars nearing its 2016 opposition.

I’d already spent late afternoon humping my 250-millimetre Dob, piece by piece, along a rocky hiking trail to the lake. It took three trips to get all my gear from the car to the observing site. First out was the scope’s heavy wooden base, then the tube assembly, and finally a double-carry of my toolbox and giant canvas knapsack full of batteries, eyepieces, charts and a notebook. None was an easy haul. Low tree branches grabbed at the bulky gear, while gnarled evergreen roots and uneven granite were the unseen hazards underfoot. 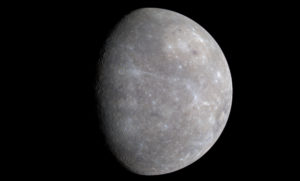 By nightfall, I was well set up and happily looking up to a pristine dark sky. Ursa Major was at zenith, so M51 was a perfect sight. Jupiter had to wait, though, because too soon I saw the western horizon had clouded up. In 20 minutes, I was wrapping my scope in nylon tarp and bungee cord. I’d never had an astronomy session rained out so fast! Not only was it drizzling and perfectly pitch-black again, but the temperature had dropped. My thermos of instant coffee was long empty and the fixings were back in the Ford, of course. Thankfully, the local backwoods party crowd had set up a permanent firepit with wood stacked nearby. Even with the damp, I managed to get up a good fire within the orbit of stones.

After several hours of rain on and off, considerable damp chill and lots of piney smoke, I saw some faint lights just above the forest on the lake’s western side. STARS! Sure enough, the roof of low cloud rolled away eastward. Jupiter was towards the southwest, so I passed the time watching its belts and moons as the mid-spring sky brightened. Mars finally appeared, too, above the forest to the south as a bright tan dot in the clear blue-and-pink sky. Transit was a go! 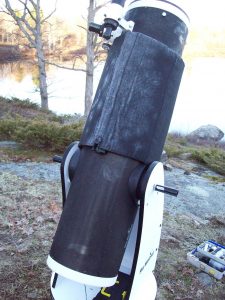 By dawn, the entire lake was covered in mist below my rocky spot. The temperature had dropped even further with the weather front’s passage. As the light came up, heavy frost covered my scope and its foam insulation jacket. For posterity, I took a photo of my shivering self, too, just as the hot Sun broke above the pines and maples.

A projection of the solar disc onto paper showed Mercury just entering the Sun’s limb. It was a tiny black dot compared to the transits of Venus I’d seen in 2004 and 2012. Still, the rocky little planet’s perfectly round silhouette against the Sun gave me the eerie awareness that comes while witnessing a celestial event happening in real time. In my woodsy solitude, I experienced the awe Pierre Gassendi must have felt in 1631 during the first observed solar transit of a planet. Through breaks in a cloudy sky, he alone watched the night side of planet Mercury as it passed between the Sun and our Earth, just as Johannes Kepler predicted it would. 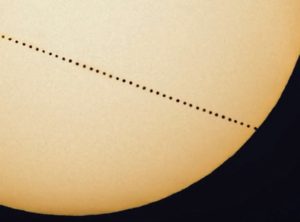 I don’t think Gassendi or Kepler ever had to lug a telescope and assorted gear piece by heavy piece back out along a zig-zagging kilometre of dripping-wet forest trail. I heard later about the gathering of observers at the astronomy platform to see the entire transit, but by midday I was deeply and exhaustedly asleep in the back of my wagon, still hidden in the nearby woods. “You know, Kepler never saw a transit, so missing egress is perfectly understandable,” Pierre Gassendi might’ve told me.

“Really, though, you should’ve camped in a Mercury.”