Posted on December 30, 2019 by Administrator

See what’s in the January/February 2020 issue of SkyNews. 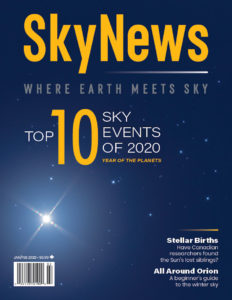 On the Cover: Year of the Planets

From the Avro Arrow to the Canadarm and beyond, a look at the career of the late Bruce Aikenhead.
Chris Gainor

The waning crescent Moon passes in front of Mars, Venus passes close to Neptune, and Mercury rises into the dusk sky.
Alan Dyer

Treasures of the Night

Orion and its treasure trove of celestial companions offer a brilliant introduction to the winter sky.
Nicole Mortillaro

In Search of Solar Siblings